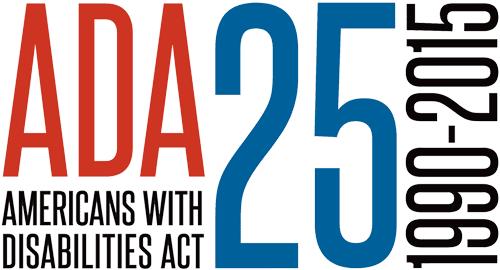 July marks the 25th anniversary of the Americans with Disabilities Act, one of our nation’s civil rights triumphs.

In celebration of the 25th anniversary of its passage, the Administration is excited to announce a series of new actions aimed at improving the lives of and expanding opportunities for people with disabilities.  Explore the timeline and highlights in the posted Fact Sheet:

Celebrating The 25th Anniversary Of The ADA

A real reason to have us celebrating,  The 25th Anniversary Of The ADA. From July 24-26, the Smithsonian Museum of American History will host a 25th ADA Anniversary Festival for Federal agencies to offer educational insights about the ADA, employment opportunities for people with disabilities, and the history of the disability rights movement.  The festival will also present interactive demonstrations of accessible and inaccessible streetscapes, new way finding technology, assistive technology, accessible vehicles, and more.  Participating Federal agencies include the Departments of Health and Human Services, Homeland Security, Justice, Labor, State, and Transportation, as well as the Equal Employment Opportunity Commission, the Federal Communications Commission, the Federal Emergency Management Agency, the National Park Service, the Social Security Administration, and the U.S. Agency for International Development.  The White House will also host a series of events in celebrating The 25th Anniversary Of The ADA for the past, present, and future of the disability rights movement.

Nicole works in Corporate & Partner Marketing for cielo24. cielo24 delivers video data solutions for media content creators across all industries, and for very special people, like you.